The following interview was conducted with representatives of the Revolutionary Communist Party of Canada (PCR-RCP), providing a revolutionary perspective on the current conditions of the pandemic in Canada.

Redspark: Three weeks ago, your organization published an article analyzing the situation of the country in the context of the COVD-19 pandemic. How have things evolved since then?

We won’t repeat in detail here the analysis of the overall situation in Canada that we described in our article COVID-19, The Canadian State, and Global Capitalism. Indeed, things have changed since that analysis was written. Suffice to say the State has taken quarantine measures that increase with every week, the virus is spreading, and our own mass work has been hampered.

The state of public health is such that the Canadian state is better equipped to deal with the pandemic than capitalist states that have no public health system to speak of. Canada does not have a fully privatized health system like the US does, and Canadian citizens have free access to healthcare. However, the years of privatization and cuts in the single buyer system, along with the pressures of the capitalist market, are resulting in an inordinate amount of pressure being placed on the infrastructure. Treatment will soon be over-burdened, and there is not enough testing being done. 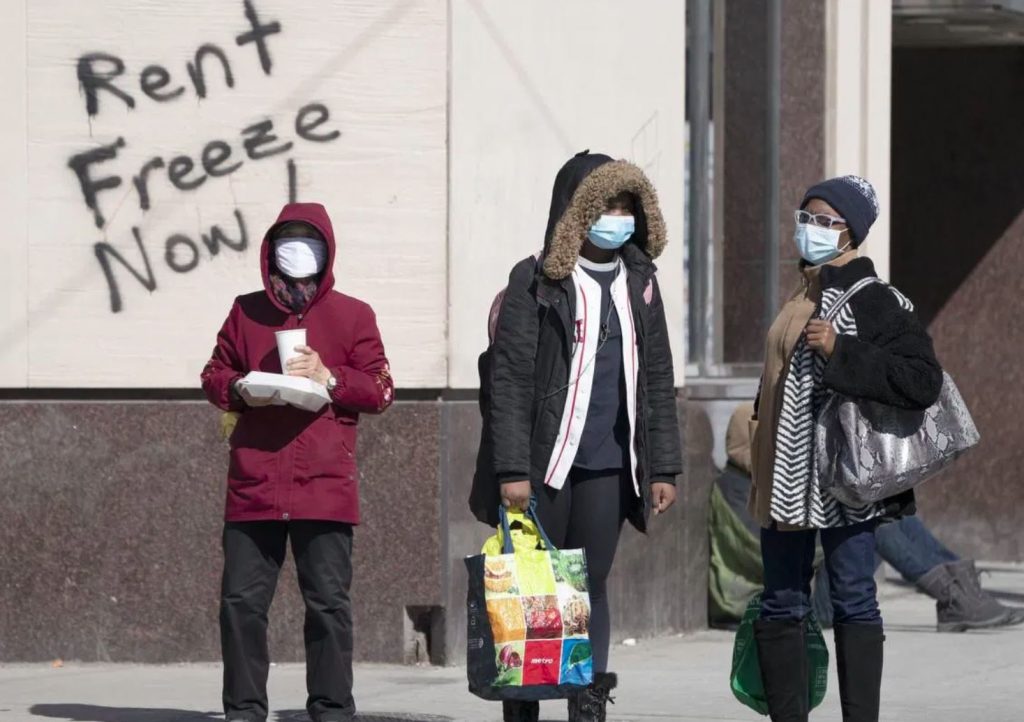 The exploited and oppressed masses are being made to bear the burden of the crisis since many still have to work, and those whose jobs have been deemed non-essential are now dealing with the possibility of not making rent or being able to afford food. (The division between essential and non-essential jobs is something that was just developing when we wrote our first analysis mentioned above.) Although the Liberal government has promised rent deferrals and extended Unemployment Benefits (EI), these will also be strained. Numerous landlords who have been allowed a reprieve on mortgage payments are raising their rent, and all levels of government have not stopped this, so that a deferral won’t matter when, in the future, tenants who have been out of work for months are asked to pay back all of the rent they missed. Nor has the government done much to prevent landlords for demanding money and threatening evictions. The EI system will soon be stretched as well and, in this context, it is worth noting that the government is more committed to dedicating public money to banks and corporations than to welfare. At the provincial level, government decisions can be even more heinous. For example, the Premier of Alberta, Jason Kenney, after having made numerous cuts to that province’s public healthcare system, is now promising––in the midst of the pandemic––more money to oil corporations to keep them afloat, now that they cannot sell their oil (despite not stopping production), rather than to healthcare, let alone the people who are most affected by the pandemic. Moreover, some jobs that are deemed essential are jobs where the proletariat is placed at risk and not compensated for the risk; some (like construction projects) are only essential for capitalists. 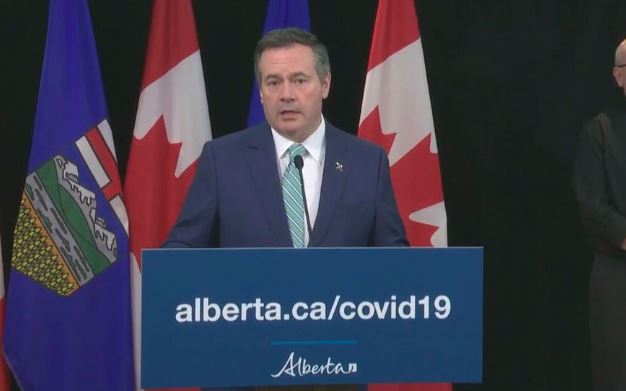 “… the Premier of Alberta, Jason Kenney, after
having made numerous cuts
to that province’s public healthcare system, is now
promising […] more money to oil corporations”

On top of this, the most oppressed marginalized populations in society are not afforded the same access to healthcare. Indigenous reserves, to cite the most salient example, lack the same public infrastructure as the rest of Canada due to the fact of the latter’s long history of colonial oppression. We all remember that, during the H1N1 epidemic, the medical “resources” the Canadian government chose to send to reserves were body-bags. In times of crisis the most oppressed and marginalized will suffer most acutely since their lives are considered to be of less worth than proper “citizens”.Border closures, as usual, have been done according to an imperialist perspective. Initially the closures were comical because they were more for show: they closed for everyone but Canadian and US citizens––right when the majority of new cases of COVID-19 in Canada were coming from the US––leading at least one satirical newspaper to joke that Canada was choosing to import coronavirus solely from the US. Although comical, they were also tragic because they took on the most brutal anti-immigrant and anti-refugee form, allowing for what anti-immigrant reactionaries had demanded for years. And now, when even US nationals were largely banned, the flow of capital is still permitted because the capitalist economy is considered more important than the lives of immigrants and refugees.

Redspark: The COVID-19 pandemic is used in many States as an opportunity to pass different laws that are supposed to be for the “national security”, but are in reality a consolidation of the power of the State. Do you see this happening in your country?

Yes this is happening. While the State needs to respond to the crisis of an epidemic because even the ruling class worries about its health, it will do so according to its class returns and in order to try to find some advantage even in a pandemic. To be clear, the ruling class is worried about losing its profits which is why its political representatives are working hard to publicly fund the private sector and finance capital, and protect the institution of private property, rather than subsidize the living conditions of the masses. But it would be wrong to think that the State wouldn’t try to find a way, even if it once worked hard to deny this pandemic for months, to try and turn it into an opportunity to consolidate power. Absurd security measures that are being given to the police, the suspension of labour laws in those instances where unions were in bargaining, and a whole host of new securitization measures. But we need to be careful about how we conceptualize this since some post-modern theorists have tried to say that the pandemic has only been declared to allow “sovereign biopolitical power” to exercise a state of emergency––which is the same kind of thinking of reactionary conspiracy theorists. The State is responding to a real emergency that has found its way to the heart of imperialism, but its response is what you would expect from an imperialist settler-capitalist state. 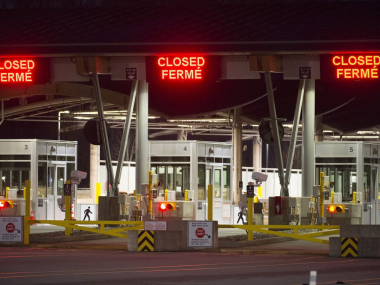 “What is strange is the number of “left” activists,
especially those previously involved in migrant justice
work, who are now praising bourgeois politicians and
celebrating border closures”

What is strange is the number of “left” activists, especially those previously involved in migrant justice work, who are now praising bourgeois politicians and celebrating border closures, as if the capitalist state is actually concerned for the masses’ safety.

The short-term repercussions of these measures are that it is extremely hard to navigate in terms of mass work. We are not close to the stage of strategic defensive––are even farther away from that goal after the two crises our Party experienced in the past four years––and were in fact in a stage of reconsolidation and rectification. This kind of mass work is hard to carry out when various quarantine measures have been enacted from coast to coast, when we do not have the apparatus we needed to have at this time, and we are not in command of something like the NPA or PLGA. The long-term repercussions are that we can expect a new round of austerity measures following the pandemic, where the masses are forced to bear the brunt of the crisis so that the bourgeoisie can continue to enrich themselves. But these long-term repercussions are opportunities for us, if we prepare in this time, to draw more people towards our political perspective. So while, at the moment, the short-term repercussions are a problem for the current stage of our movement, we are hopeful that we can work to address the long-term repercussions in a way that benefits the revolutionary movement.

While people in most affected countries are in forced quarantine and the massive loss of employment for huge portions of the population, the objective conditions for organizing and doing mass work have changed dramatically.

Our work has changed because we cannot carry out the same mass work in all party branches as we had been doing before the pandemic. Some branches are completely isolated and quarantined. Some cadre have been isolated because of contracting the virus. Some work with marginalized populations needed to cease due to the danger of spreading the virus. At the same time, other branches have had the ability to work safely in this crisis and use it to their advantage by pursuing rent strikes, or mutual aid and serve the people initiatives.

For example, our Saskatoon branch has been working to provide mutual aid to the masses through free food and supply deliveries in the Saskatoon area, while utilizing the hampers to disperse propaganda surrounding rent strike action and the potential building of a tenants union. Their rent-strike/tenants union work has also involved building working relationships with local pro-bono lawyers and law students, identifying and compiling information on especially heinous landlords, and providing advocacy and support for tenants who are facing evictions despite the suspensions. They have also been reworking the logistics surrounding a community farm project they initiated before COVID-19, with the goal of still getting it planted while abiding by PHAC safety recommendations to ensure the community in question is still fed come this fall.

In Vancouver, while some older comrades are in isolation for obvious reasons, the branch is planning to launch mutual aid work. Comrades in the Proletarian Feminist Front there are examining the possibility of offering childcare for working-class mothers. The Montreal branch has been working with other Maoist groupings around rent strike actions, doing their best to agitate and build networks of solidarity in this time. These are just some of the tasks folks in our circles are taking on during this time.

For us, the principle revolutionary task is to try to find a way to transform this crisis into an organizational opportunity. Whether this happens through the on the ground work we are able to carry out in this time––where we can support the masses most adversely affected by the pandemic––or whether it happens through preparation for the harsher austerity regime waiting for us when the pandemic ends, it is clear that the crisis is exposing the limits of capitalism while also being used by capitalism as an opportunity for larger repressive measures. More people will feel the violence of capitalism, more people will be open to politicization, and we need to work on making it clear that none of the electoral parties can satisfy this anger and disaffection. For even the NDP (New Democratic Party), which claims to represent the working class, has done nothing to protect their interests in the pandemic, just as they have never done anything to side with the oppressed and exploited. If those parts of our movement that are capable of carrying out safe mass work during the pandemic can win people over ahead of time, so much the better.

“More people will feel the violence of capitalism, more people will be open to politicization, and we need to work on making it clear that none of the electoral parties can satisfy this anger and disaffection”